The Christmas period is over and I’ve finally got chance to bring you a somewhat brief report on my trip to Wutai 2 weeks ago.

The year started with hiking and would end with it, and something a little different. I’d been really enthusiastic about the mountains until late February then it started to heat up, the baseball started and my enthusiasm quickly evaporated. Aside from a few short walks, i.e. Jiantan in May, I’d really done nothing on the hiking front. This winter has ended up focused on cycling but for one day only, things would change. I know realise upon reading this back how nice it would be to head out to the hills again!

The Southern Taiwan Hiking group put out a post asking if anyone was interested in a trip to Wutai in Pingtung. It involved a hike, a hot spring and aboriginal meal, three things that really interested me. I’d known Wutai as being an aboriginal village deep up in the Pingtung mountains and it was inaccessible by public transport, I signed up. Despite not liking group activities this was a unique chance to do see Wutai, eat aboriginal food and visit a hot spring.

It was an early start which felt even earlier for me after I’d had about 45 minutes of sleep! I had to meet up in Kaohsiung which meant taking a train but I’d not wanted to leave my bicycle in Tainan City Centre all day. The first bus wasn’t until 6:15am which wouldn’t allow me to get to Kaohsiung until gone 8. I compromised and decided to cycle to Bao-an, one stop down the line and 6.5km away. It meant I could leave later at 6:15 and easily make the 6:50am train.

I got to Bao-an and bike parking wasn’t ideal. I ended up surrounding my bike amongst a load of rusty others and hoped Bao-an was as safe as it felt. I left my bike behind and took the train down to Minzu station

I tried to find a 7 Eleven nearby but couldn’t and worried about the 8am meet up time so had to go without. This didn’t end up mattering as I found the van wasn’t leaving until gone 8:30am. I did get my coffee and my food after all! It was 9am before the van finally started heading towards Wutai, picking up a straddler near the martial arts stadium.

Coming off Highway 3 and onto Highway 24 I recognized where we were, on the same road as I’d taken on a tourist bus to the Aboriginal Culture Center in Sandimen. The mountains got closer and soon we were heading up the spectacular mountain road to Wutai checkpoint. 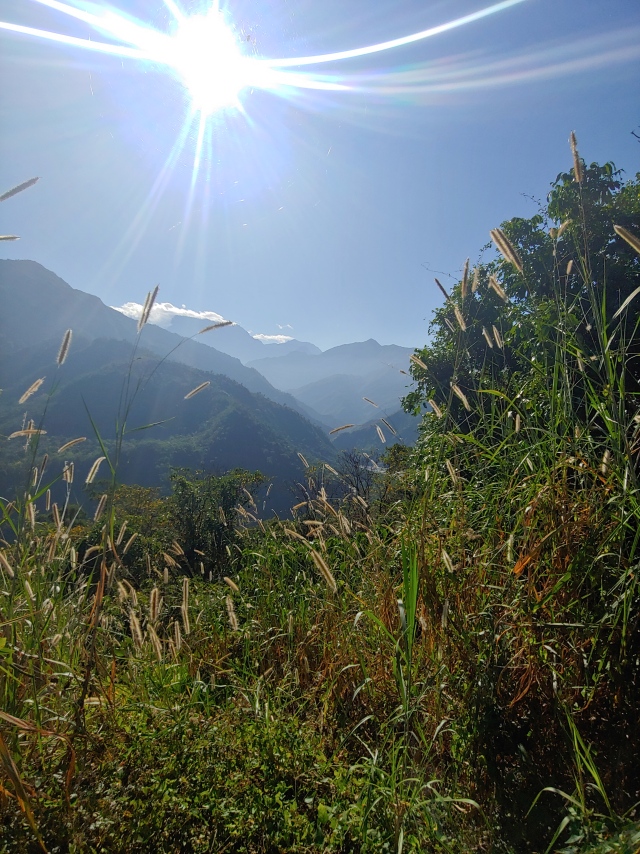 The scenery got better and better as we got further up the mountain, the drive alone being worth the trip.

The drive soon came to an end, and it was just as well, I’d been travelling for well over 4 hours and just wanted to ‘get going’. What I didn’t quite know what was the hike would entail and as we descended down a rocky embankment to a river I quickly realised I’d wore the wrong things.

We had to cross a river which was over boot level deep. Never mind, once isn’t so bad I thought, then I was told we’d be crossing many many more times. It left me pretty downhearted and feeling silly for wearing boots. With wet feet and most others in waterproof shoes I knew it was going to be a long walk. Added to my wet feet I had thick socks on which absolutely ensured I’d be uncomfortable for the duration.

The second river crossing was nearing waist deep and at this point I abandoned my frustrated demeanour in favour of a “let’s just enjoy it” attitude despite my reservations crossing the river. Going waist high in water was strangely fun but crossings themselves left me a bit worried, not necessarily the depth but the fact I’m usually clumsy especially when it comes to rocks and slippery rocks even more so. It didn’t take long for me to gain some confidence and this became an enjoyable hike within about 20 minutes.

One aspect that may have helped was the incredible scenery walking up the valley. I was simply in awe and I guess it took my mind from the wet feet and fast flowing current.

The worst crossing was the 7th, and even after taking the initiative with the pace (no surprises given my length) I stopped. The water was fast moving and it looked deep. It was a tricky crossing which required some teamwork but after that, it was fairly easy until the final two.

The last two crossings were quite deep and looked treacherous. This wasn’t so bad, what seemed to be was we’d been informed we were an hour short of the hot spring area. It was 1:15pm and there was a need to get back before 4 for the restaurant and to ensure the van got back to Kaohsiung by 7.

People stopped for 30 minutes for lunch and to rest whilst I idlely sat on a rock bored. It got too much for me and I slow set off back down the river now feeling confident to take on the river alone. It was the one downside to being with a group, a slow pace. Usually when I hike it’s at speed without much need to stop and rest. I made the first three crossings back with people in sight then spent about 45 minutes alone.

What I was oblivious to was many of the group were sat in a warm pool and I was missing out. That said with my boots as soaked as they were, taking them off would meant getting them on would have been almost impossible. 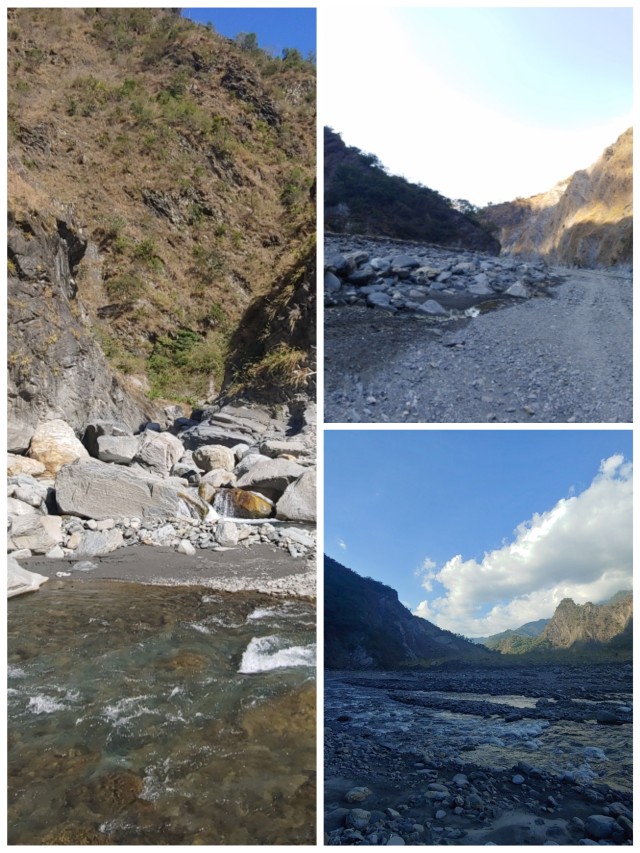 An Englishman by the name of John caught up as I slowed down. I had been helped across to river crossings by mountain bikers and I had some company right back towards the bridge at the start. Unfortunately we forgot where to make the last crossing and I ended up having to dive for the bank as I teetered backwards.

2 hours 10 after leaving the rest point me and two other members of the group were back. Most of the others were at least 15 minutes behind and it gave me chance to snap a few photos from the aboriginal painted bridge that spanned across the valley.

With the group back together about 20 minutes we headed for the aboriginal restaurant. What I didn’t realise was most had changed, whilst I sat in my base layer oblivious despite having brought a spare t shirt and trousers!

The view from the restaurant was superb and the food was even better. Aboriginal style pork was ordered as if catering for a small army and it became obvious why… It was smoky, tender and just a really really great cut of meat. Also ordered was sweet potato which found myself wanting more and more of, ome steamed vegetables and chicken. I could eaten far more and it was a crazy cheap NT$200 a head.

Around 5:30pm we moved on and back to Kaohsiung where we arrived back around 7. NT$450 for the van/fuel and I trudged along to Kaohsiung station for a train back north.

My bike was where I’d left it and after a tricky 6.5km cycle in boots that weighed twice what they usually do, got in around 9.

Excellent food, wonderful scenery and a fun hike. Not a bad way to spend a Sunday.